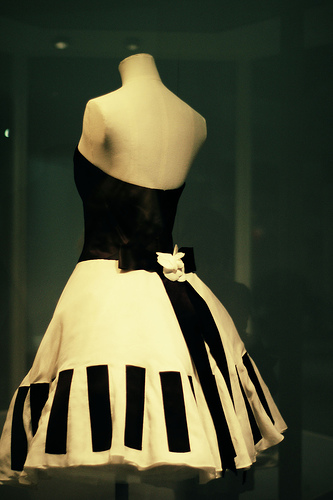 Every year our Northeast Pennsylvania Music Teacher’s Association holds auditions for students to compete for a chance to perform in Weill Hall at Carnegie Hall, NYC. It’s a big deal for the students and their families. And often more than one child from the same family has an opportunity to perform. I have a second grader preparing Susan Ogilvy’s Toccatina for next month’s audition. Last year her older sister auditioned and scored enough points with Lynn Freeman Olson’s Sword Dance to play in New York.

The younger sister came in to her last lesson and couldn’t wait to tell me all about her new audition dress, new shoes, stockings and even matching hair bow. Then she told me that she and her sister were looking over the judge’s score sheet from last year and noticed that the older sister had been awarded two points for “style” and she wanted to make sure she’d get points in that category, too.

She should definitely get points in the musical style category because she’s been practicing under tempo with the articulated finger staccato that the Toccatina requires. Add to that the fabulous new outfit she’s planning to wear and she’ll definitely get the two points!

As a performer it is possible to take it one step further and combine fashion and music and come up with a new performance experience. That’s just what pianist, Sugar Vendil has done with the Nouveau Classical Project. On their website they describe themselves as:

… a group that reimagines the classical music concert, creating a place where fashion and music converge. In a time where audiences tastes have grown more diverse, we offer a fresh and exciting way to experience art music that will satisfy cultural omnivores.

We provide a platform for emerging composers, fashion designers, musicians, and artists to showcase their talents to the creative and curious listeners of New York City. We achieve this with our concert series and events, where we create opportunities for contemporary composers to have original work presented. At NCP we also do not take the visual element for granted: fashion, informed by a modern perspective, matches the music. Musicians garments (our ensembles ensemble) are styled by fashion designers, who base their inspiration on the music we program.

Sugar Vendil is interviewed in this story in “Sonic Scoop” –

“I think part of what’s killed classical music is that people want to keep it in a ‘certain place,” Vendil says. Instead, she is succeeding in breathing new creativity and life into the classical scene in New York City, or as some in the city are calling it, the “nouveau classical scene.”  NCP’s slogan, “Classical Music is Dead,” is a tongue-in-cheek catch phrase – one that often evokes a feeling of rebellious urgency to the genre’s many aficionados who see it on T-shirts across the city.

Since this and this are two of my guilty pleasures, I absolutely love her idea of intertwining of fashion with music and art. (Check this old project of mine while it’s still online…)

Pop singer/songwriter Mika, talks about his composing process here. He mentions that growing up he listened to everything from classical to folk including Bob Dylan, Joan Baez, Egyptian, Flamenco, Reggae, and American standards – although not too much pop or rock music. If I had to name the single most important thing a young pianist could do to contribute to his musical growth I think I would have to tell them to listen to music — all kinds. Start with a YouTube search for Billie Holiday or Glenn Gould, for example, and spend an hour or more just following the links and listening to music.

I love when my students come in and mention an artist or a piece they like, maybe it was something they played in the school orchestra or just something they heard online. I make a point to find the piece and listen to it before their next lesson so we can talk about it and try to find a piano arrangement to work on. But I especially love when my students take my recommendations and go home and listen to the music I suggest to them.

And in case you’re looking a the white stuff today, here’s clip of Mika singing Let It Snow.

Enjoy Lola Astanova’s virtuosic arrangement of Jingle Bells while you wait for the snow to come!

Jade Simmons puts her stamp on a holiday favorite. Enjoy!

Turns out he was right.

One example from the classical piano world is James Rhodes new album, Bullets and Lullabies, due to be released tomorrow in the UK and on December 28th here in the U.S.

…when he starts to play, it’s an intensely classical programme with not a whiff of a crossover number. No wonder Warner Bros. Records have just snapped him up as their first ever classical musician. It’s proper classical music, but in an overwhelmingly accessible package that screams mass market youth appeal. (read more of the review here)

Another example are the recent live broadcasts of both the Van Cliburn Competition (2009) and the Chopin International Competition (2010) which generated an outpouring of blog posts, chats, and Twitter and Facebook comments from musicians and non-musicians from around the world. Whether or not you are a fan of these competitions the fact that these performances are available to everyone (with a connection to the Internet) is more evidence of a new interest in classical piano performance.

To follow up on my post about the informal holiday recital at the studio, here is a link to a video of Sara Bareilles and Indrid Michaelson recording Winter Song. One of my 8th graders performed this piece and sang it beautifully…no easy task to carry the melody over the rhythmically complicated accompaniment in the middle section.

The short program included Charlie Brown’s Christmas, a Chopin Nocturne, White Christmas, Winter Wonderland, Have Yourself A Merry Little Chritmas, and more favorites. The students (ages 8 to 15) all did well… and the parents loved hearing the music they recognized. And just about all of the pieces were learned and in less than two weeks!

In the spirit of “Go Play!” my students are presenting an informal performance tomorrow night. I try to schedule these “coffeehouse” performances monthly so what’s so special about this one?

Well, I realized today that every student who’s performing has had less than two weeks to prepare their piece(s). Most of them have had less than one week. Granted, they are playing familiar Christmas tunes, but nevertheless, all fifteen of them will be getting up in front of an audience and playing…and not one of them has hesitated or mentioned the word “nervous.” In fact, if it weren’t for scheduling conflicts, there would have been over twenty students performing at The Music Studio tomorrow evening.

What can be gained from this seat-of-the-pants performance?

Improvisation…do I really need another nudge?